Sooty goes to ‘The Supervet’

Sooty goes to ‘The Supervet’ 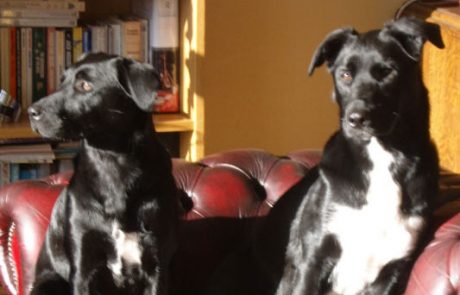 Here is the story of Sooty and some photos. Sooty is guarding the Chilli plants on the stairs, Sweep has the white blaze on his chest, Sooty has the white paw (left leg) and Scamp is the large white Labrador Griffon cross.

Graham and Judith Hughes tell the story of Sooty and Sweep, a brother and sister, black and white Labrador/Collie x dogs.

We adopted, Sooty and Sweep, as young pups, from Phoenix 9 years ago and their half-brother Scamp, also from Phoenix, 5 years ago.

Sweep exhibited lameness in his back legs 2-3 years ago and 18 months ago he had his first hip replacement at Bayeux veterinary clinic. Unfortunately, the operation was not perfect, as his sciatic nerve was damaged. His recovery took 3 months. We took him for walks on the soft sand of a nearby beach to help restore strength to his nerve-damaged leg. He had to be taught how to walk again using his left leg. We did this with the use of a running machine.

Just as Sweep was back to normal on his left hip, Sooty started to exhibit a problem with her front legs. She would occasionally lift one or the other when out playing in the garden with her brothers. We took her to our local vet who x-rayed her legs but thought from the x-rays that it might possibly be cancer. Our vet recommended a referral to Bayeux for a scan to fully diagnose the problem. Fortunately the diagnosis was not cancer but arthritis. However, the specialist in Bayeux would not perform front elbow surgery for three reasons. The first reason was that the success rate was not considered to be sufficiently high enough. The second, that it was a very expensive procedure and thirdly because, in his experience, most dogs can be happy walking on three legs.
We asked if there was a possibility of finding another orthopaedic vet specialist in France, one who would be prepared to conduct the surgery. The specialist said he had no knowledge of such a vet.

We desperately wanted to give Sooty the best quality of life we could and if it then failed, the fallback position would be amputation. So we returned to our local vet and asked if they would refer Sooty to Fitzpatrick Referrals in the UK. They were happy to do this, filling in all the forms and sending the scans, and medical history, asking if they would accept Sooty as a patient.

Noel accepted her, as those of you who managed to view the Channel 4 TV programme, ‘The Supervet’ episode 6, will know.

Noel Fitzpatrick scanned Sooty’s front legs. He found a crack in the head of the humerus in her left leg and elbow dysplasia in the right.
Operations on both legs were carried out in April. The operation on the right leg involved cutting the humerus and inserting a prosthesis to re-align the bone segments (Sliding Humeral Osteotomy – SHO). This was to allow re-establishment of more normal forces across the operated elbow joint. At the same time stem cells were injected into the articulation to encourage cartilage growth.
The surgery on her left leg involved cutting off the smaller of the two bones of the forearm (Proximal Abducting ULnar osteotomy – PAUL) to remove the pressure off the head of the humerus.

After 4 visits back to the UK for check-ups and monitoring Sooty’s progress, the right leg is now rectified. The left leg needed to be monitored for a while longer.

Sooty’s right leg has healed absolutely perfectly with no problems. Unfortunately, the recent x-ray results on her left leg, where Noel performed the ulnar osteotomy were not so good. It has not fused together as was hoped and it is now looking unlikely to do so. However, she is out of pain and the specialist in Bayeux confirmed that as long as Sooty has no lameness in the left leg, the radius is more than capable of taking her weight without issue. So, she is now allowed free reign in the garden and is again a very happy dog. She has a slightly different gait when walking, but this is probably due to the right front humeral osteotomy and the large prosthetic implant that was used to correct her elbow pressure points.

We are very happy that Sooty is out of pain, she has no need for no pain medication, and appears to be very happy indeed, playing and running in the garden and enjoying being with her two brothers.

Sweep has just returned from Bayeux having had his second hip replacement and this time it was text book perfect. He is walking very well, only three weeks after surgery, Sweep’s doctor in Bayeux is very happy with his progress and believes that after another 3 – 4 weeks he can be allowed to run around off the lead.

Thank you, Graham and Judith for sharing this story. We wish you all many more healthy years together.